My friends over at Alley Insider (I am an angel investor there) have a good read up on the death of TV. They are on top of their game at the moment. The site is cranking and the headlines and content are always inviting.

They have written hundreds of posts on the death of TV since 2010. I get it. They think TV is dying.

Jim Edwards, the author of most of these, is not a guy you want near your stock portfolio though.

In Jim’s defense, ‘Death’ is a better traffic term than ‘life’ or ‘birth’ unless it’s … ‘Silicon Valley Entrepreneur Gives Birth to 8 Children who Started Coding Immediately’.

I live with teens and I am deeply engaged in their media lives. I buy their digital toys, I send them email, texts, apps to try and I watch Netflix with them both every every evening. We engage in all this media on screens. Some TV, mostly an old Apple monitor. TV is just part of it all. There is no life, there is no death, just immersion.

Here is how a group of ‘television’ stocks have done since Jim and AlleyInsider began covering their death: 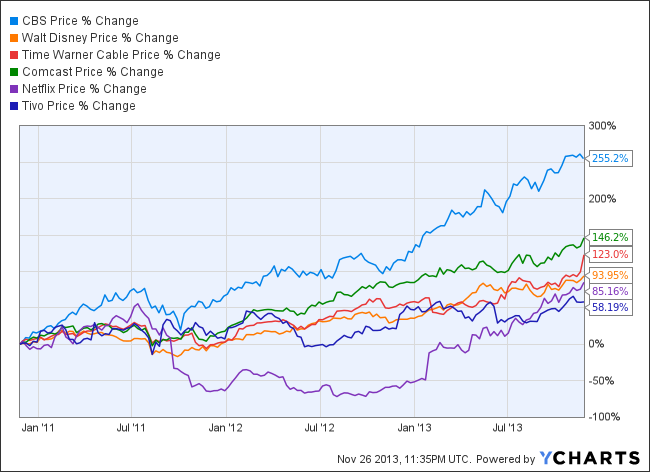 What stands out is netflix is winning. That makes sense.

TIVO, which was supposed to ‘kill’ television’ has always been the closest to death.

With respect to the rest….people die, television executives will always be assholes, but cash flow is life!