The markets are not changing so much as the technology that makes markets move. The technology has enabled machines to ping each other at speeds that give them an edge over humans (at least in the very short term) and people are connected to other machines and people in ways that can’t be quantified. The social web and the leverage from these connections have the media confused and it seems angry, if not completely wrong.

The New York Times $NYT and the rest of the financial media continue to butcher story after story about the social web (media) and financial markets.

Today it was this stupid, stupid headline and lead:

‘Could the Global Economy Hinge on 140 Characters’

The writers of the article have ignored reality, facts and the state of the markets.

It is the people that are speaking and it is Twitter delivering the fantastic black canvas of the time. The Global Economy does not hinge on any one person or event, let alone 140 characters.

The reality is that information is not behind the walls all neat and tidy like Bloomberg, public companies and the wires would like it to be. People that want to be tapped in now follow the right people on Twitter and obviously other networks like Stocktwits which offer communication, context and community. The markets in the real-short term do a real horrific job of listening. They are too big. They react.

The $VIX (one widely accepted measure of market volatility) has been in a steady decline since the social web began it’s boom in 2009. Here is a chart: 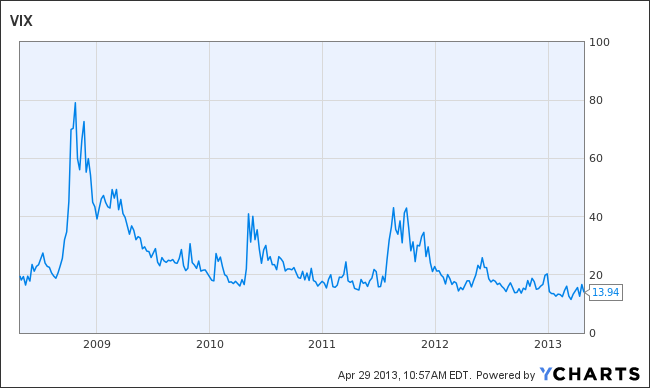 It makes sense. Everyone is connected, not just the people ‘in the know’. Of course with everyone ‘holding hands’ in this new world, the reactions like the AP hacking will be more volatile and the recoveries that we saw after, just as fast.

The hackers know this. Hackers are impossible to stop. You just force them to step up their game as the technology improves.

Mark Cuban had this to say about the change in markets from technology:

“There’s just no new names, no new energy, no new opportunities, and that’s a problem,” said Mark Cuban, an avid trader, entrepreneur and owner of the Dallas Mavericks. “That’s a reflection of the lack of trust, the fact that we don’t know what business the markets are in, and there’s so much algorithmic trading and technology-driven trading it’s created downstream problems.”

More rules are not going to help. Better enforcement of the existing rules and punishing the thieves that break them is the solution.

We are still paying for awful regulations that were a ‘reaction’ to past hacks on the financial system from the likes of Enron (which led to Sarbanes-Oxley Act) and the Investment Banks and mortgage panic (Frank Dodd).

If we let guys like Bart Chilton get his way around this type of shoddy headline writing, the walls will get higher around the financial world, not lower and we will go backwards.